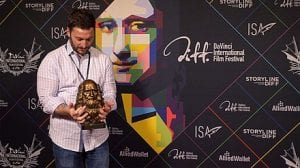 Winners of these categories go on to screen and compete at DIFF’s Live Showcase Event for their shot at the festival’s most prized award, The Leo.  DIFF Programs include feature-length films, shorts, “DIFFdocs” for Documentary film, DaVinci Film Institute, and their screenwriting competition series, STORYLINE

The DaVinci International Film Festival is a boutique showcase event that is dedicated to representing the best of independent cinema from around the world, and believes their name says it all. Leonardo da Vinci was regarded as the epitome of the creative and divergent mind, and thus the festival aims to honor as much within their model and creative communities; DIFF judges are tasked with an overall assessment of any given film project as it relates to storytelling.  In addition to the festival’s film program, the company co-launched the DaVinci Film Institute as a nonprofit division that dedicates a portion of festival proceeds toward a student filmmaker grant each year.

DIFF’s inaugural festival was presented by Allied Wallet and held on May 17, 2018 at the Laemmle Theatres in Santa Monica.  The festival was awarded “TOP 100 BEST REVIEWED FESTIVALS” its first year, and showcased award-winning films from around the world, including Rumble: The Indians Who Rocked the World, Tracktown, Bikini Blue, and Jasper.

DaVinci International Film Festival governs three brands.  DIFFdocs the festivals documentary program, is a standalone competition series for long and short formats and qualifier for both the Vitruvian and Leo Awards.  STORYLINE is the festival’s quarterly screenwriting competition series, awarding writers in all genres of long and short format.  The festival’s third brand, DaVinci Film Institute is a 501(c)(3) organization dedicated to burgeoning filmmakers from around the world as their non-profit arm.  DFI supports a film grant that is directly funded by the festival submission and sponsor(s), and presented to a duly qualified applicant at the Live Showcase Event each year.

Each year, DIFF accepts nominations by way of third party application for the festival’s “Spotlight Project“.  The selected film or screenplay is qualified by the festival’s Jury, and is awarded a dedicated page on the festival’s website, as well as an Honorable Mention at the Live Showcase Event each year. Former recipients include Lithuanian-Swiss Pop singer, Ginta Biku’s “Mais Oui, Mais Non”, and two-time Red Poppy Award winner, “She Will Be Loved“, produced by CoffeeRing Entertainment LLC.

The festival has a presence in both the United States and Europe, and is currently operated by Founder / Festival Director, Chadwick Pelletier and Coordinator, Pete Punito.  The festivals European representatives are located in France and Spain.

DIFF Store Cart
Thank you for your support!

DaVinci Film Foundation contributions of $2500 or more will receive our "All Access" pass, which includes priority seating to Vitruvian Award winning films, seat reservations (up to 4), filmmaker Q&A, scheduled DIFF Events, and our VIP After Party with food and drink.

DaVinci uses cookies to ensure that we give you the best experience on our website. If you continue to use this site we will assume that you are happy with it.OK